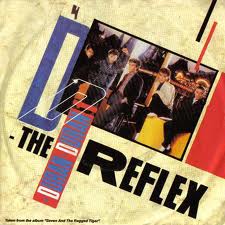 “Every little thing the reflex does leaves you answered with a question mark…” goes the closing line of Duran Duran’s first Number 1 single in the US. They could have been talking about many of their songs’ lyrics when they wrote that line. And yet in 1984, Duran Duran was the very height of state-of-the-art MTV pop, consumer goods for a consumer age, selling sex and style to a generation of teens who wanted their British crossovers as cute as their parents’ did twenty years before, only this time the mascara was darker, the blush was brighter, and the designer shirts were tighter. Other British bands got more critical kudos—after all, these guys couldn’t be real musicians, could they?; they were the boys who frolicked on yachts and ran through jungles in all their video glory. But as ruthless as the critics were to DD, the Durannies understood: these guys wrote some sturdy songs, ready-made for radio and, as necessary to the times, video, too. (One way to gauge the solid musicianship of DD is this: upon hiatus after this album, half the guys teamed up with Robert Palmer and Chic’s Tony Thompson to form Power Station as the other half got peeps like Sting to appear on their Arcadia album. None of those artists needed Duran Duran for sales or hipness credibility.)“The Reflex” came off the lush Seven and the Ragged Tiger album, following great singles like “Union of the Snake” and “New Moon on Monday.” But the version of the song that exploded was remixed by super-producer/disco-architect Nile Rodgers, a perfect choice for the band. He brought out the ruthlessly dance-y dynamics of DD’s keyboard/bass mix and created a sonic pleasure zone around the boys that matured them just enough without losing their pop-tartness, yet also gave them a muscular-enough sound that made the music absolutely undeniable. There’s a reason this became DD’s first US #1: guys got into the groove and supplemented all the girl-love the guys had depended on for years. Blending Bowie’s way with a cut-and-paste nonsense lyric (that always, nonetheless, made rhythmic sense) with Bryan Ferry’s fussily contoured style warrior pose, Duran Duran made music for the masses that made the masses feel like they were sipping Champagne rather than C&C Cola. Dancing to Duran Duran was like going to the popular kids’ party, where the right clothes and the right touch of “class” meant you were part of the in-crowd. “The reflex” may have been, according to the lyric, “an only child who’s waiting in the park, in charge of finding treasure in the dark,” and Simon Le Bon may have been singing about how he “sold the Renoir and the TV set”—none of which made any actual sense in the world I was living in. But damn if it didn’t sound incredible and get me shaking me my ass while I wore my Walkman all over the place. And the video was a teen-dream in 1984: that waterfall blew kids’ minds…!

Listen to it here: